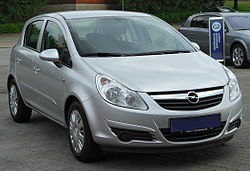 Template:For Template:For Template:Infobox Automobile The Opel Corsa is a supermini that has been produced and engineered by Opel since 1982 and has also been sold under a variety of other brands (most notably Vauxhall, Chevrolet, and Holden), and also spawned various derivatives in different markets, all of which are listed in appropriate sections below. The names Vauxhall Nova, Holden Barina and Chevrolet Chevy have been used for the Corsa in certain markets. Despite its global presence, it has never been sold in the United States or Canada. The Corsa is built at Figueruelas in Spain, and in other countries such as Argentina (Rosario), Brazil (São Caetano do Sul and São José dos Campos), Colombia (Bogotá), Mexico (Ramos Arizpe), South Africa (Port Elizabeth), India (Halol), and China (Shanghai). Template:TOC limit

The front-wheel drive Corsa was first launched in April 1983 to replace the Opel Kadett C City. Built in Zaragoza, Spain, the first Corsas were three-door hatchback and two-door saloon models, with four-door and five-door versions arriving in 1984. The basic model was called just the Corsa, which was followed by the Corsa Luxus, Corsa Berlina and the sporty Corsa SR. Six years later, the Corsa received a facelift, which included a new front fascia and some other minor changes. The models were called LS, GL, GLS and GT. The Corsa was known in the UK market as the Vauxhall Nova. Power first came from 1.0 L 45 hp, 1.2 L 55 hp, 1.3 L 70 hp and 1.4 L 75 hp petroleum engines. (the first engines were all equipped with carburators, fuel injection came later, only on the 1.2 and 1.4 engines). The engines were based on well proven GM Family II design, except for 1.0 L engine which was based on the OHV unit from the Kadett C. There was also a 1.5 L diesel engine available, which was also used in the Isuzu Gemini at around the same time. The engines and most of the mechanical components were derived from those used in the Astra/Kadett. A rare "Sport" model was produced from 1983 in order to homologate for the sub 1300 cc class of Group A for the British Rally ChampionshipTemplate:Citation needed. These sport models had SR suspension, SR engine with twin Weber 40 DCOE carburettors, a bespoke camshaft, close ratio GTE gearbox, and few luxuries. This gave 93 hp and a top speed of 112 mph (180 km/h) with a 0-60 mph time of 8.9 seconds. These are by far the rarest models (500 produced) and thus acquire a high market price if one does become available. A 1.6 L multi-point fuel injected engine with Template:Convert and capable of Template:Convert was later added to the Corsa/Nova, giving decent performance and being badged as a GSi (GTE in pre-facelift models in the UK, later models were all called GSi). A model with an Template:Convert 1.4 L multi-point fuel injected engine also became available as the SRi, which was otherwise mechanically identical to the GSi. The design was freshened in 1990 with new bumpers, headlights, grille and interior, but the car was showing its age against strong competition such as the Ford Fiesta and Peugeot 106.

The Corsa A was rebadged as the Vauxhall Nova between 1983 and 1993, primarily for the British market. It replaced the Vauxhall Chevette and Opel Kadett City. All Nova and Opel Corsa models were made in Spain, with the first British customers taking delivery of their cars in April 1983. It gave Vauxhall a much-needed modern competitor in the UK supermini market, as the Chevette was older than the majority of its competitors, chiefly the Ford Fiesta and Austin Metro. Sales in the UK were strong right up to the end,Template:Citation needed. Its successor was the Corsa (B); the second Vauxhall to adopt the same model name as the Opel version, the first being the Senator. By 1996, all models of the Vauxhall and Opel ranges were identically named. Template:-

Template:Infobox Automobile generation In 1993 the Corsa B was unveiled, and in the UK, Vauxhall dropped the Nova name, with the car now being known as the Corsa. The following year, it was launched by Holden in Australia, as the Barina, replacing a version of the Suzuki Swift sold under that name. This proved a success, and was the first Spanish-built car to be sold in significant volumes in the Australian market. Four-cylinder power came from 1.2 L Family 0, 1.4 L and 1.6 L Family 1 petrol engines, as well as an economical 1.5 L turbodiesel engine. Unlike the previous model, there was no saloon version, but one was designed in Brazil for the Latin American market, as saloons were much preferred to hatchbacks. This was also introduced in South Africa and India. A station wagon, panel van and pick-up truck were also introduced. The wagon version was sold in some European markets (including Italy), badged as an Opel. The Corsa also spawned a small coupé called Opel Tigra. A 1.0 L 3-cylinder Family 0 economy version was launched in 1996, and a Lotus-tuned suspension was added as well as an exterior refresh.

The sedan model is still built and sold in Latin America as Chevrolet Corsa Classic. A budget version introduced for the Brazilian market, the Chevrolet Celta, has bodywork resembling the late 1990s Vectra and Astra. The Celta is sold in Argentina as the Suzuki Fun.

The saloon and wagon versions were produced in China by Shanghai GM as Buick Sail and Buick Sail S-RV, respectively, until 2005. That year they became known as the Chevrolet Sail and SRV. In September 2006, Chile became the first country outside China to receive the Chinese-assembled Sail; it is called the Chevrolet Corsa Plus, available as a four-door sedan with a 1.6 L Template:Convert engine. The Corsa Plus includes dual front airbags, anti-lock brakes, air conditioning, electric windows and central locking as standard equipment. In India, the hatchback, saloon and wagon versions were sold as the Corsa Sail, Corsa (or Corsa Joy) and Corsa Swing respectively until the end of 2005. The hatchback model was still being produced, and extensively marketed in South Africa as the Corsa Lite under the Opel branding until 2009 at which point the Corsa Lite was discontinued.

In 1994, General Motors de México first marketed the Corsa B as the Chevy, which would quickly replace Volkswagen's Sedán as the people's favorite. For 2004 (after the Corsa C was introduced), a Mexican designed and produced version of the hatchback and sedan, known as the Chevy C2, was released, which is also sold in Colombia. All Mexican previous versions were known as the Chevy, with the names Monza used on the sedan, and Swing (5-door) and Joy (3-door) for the hatchbacks. The latter 2004 and 2008 redesigns were simply named Chevy and Chevy Sedán. The Chevy remains a favorite among taxicab drivers and one of the best selling cars in the countryTemplate:Citation needed.

Template:Fixbunching The Corsa C was revealed in 1999 and introduced to the European market in 2000. General Motors dubbed the new chassis Gamma and intended to use it in a number of other models. A sedan version is also offered in Latin America, South Africa and the Middle East. The Brazilian version of the Corsa sold in those countries featured a more conservative front end than its European counterpart. Brazil also offers a pickup truck version of the Corsa named the Chevrolet Montana (sold in some markets as the Tornado), which, as well as the sedan, is exported in completely knocked down form to South Africa for local assembly. GM South Africa markets the hatchback simply as The New Corsa, and the pickup version as the Utility. Since 2007, the Corsa C saloon has been discontinued in South Africa. This car was 2001 Semperit Irish Car of the Year in Ireland.

The Corsa C arrived in the 2002 model year as a five-door hatchback, and was imported from Europe; but for the 2003 model year, the Corsa sold in Mexico began coming from Brazil and a sedan version was added. In 2005, the sedan version introduced a semi-automatic transmission called easytronic because it was only offered in a five-speed manual transmission, however, the easytronic transmission was rapidly discontinued after the 2007 model year because of poor sales and technical flaws.Template:Citation needed For 2008, the Corsa was tweaked with a freshened grille, lights and a gold colored Chevrolet logo. The Chevrolet Corsa C was discontinued from the Mexican market in June 2008 leaving only the older and freshened Chevy (Corsa B); and was replaced by the Chevrolet Aveo. In 2002, the Corsa chassis spawned a mini MPV called the Opel Meriva, development of which began under Opel in Ruesselsheim (but finished by Chevrolet in Brazil). The Corsa C is still manufactured and sold in South America. The production plant that produces this car model is located in Rosario, Argentina. Since 2007, the Latin American Corsa C features the Opel-inspired Chevrolet logo with a golden bowtie instead of a chromed one - the new logo was first introduced in the South American market with the new Chevrolet Vectra. In Australia, the car was launched to much fanfare from many motor journalists, and went on the win the Wheels 2001 "Car Of The Year" (COTY). Holden also imported the SRi version with the 1.8L Astra motor and uprated sports suspension including traction control, ABS brakes, a better tyre/wheel combination and Irmscher body kit to produce a "baby hot hatch" Barina. The face lifted 2004 model was also imported, however, in December 2005, the Corsa C was dropped from the Australian and New Zealand Holden ranges as a cost-cutting measure by GM, to be replaced by the Daewoo Kalos, which is now badged as a Holden Barina. Motoring journalists have been scathing in their criticism of the new model, particularly the bland handling, lackluster engine and below-par safety features.

Template:Unreferenced section This Corsa was a huge success for Vauxhall in Britain, being the most popular supermini and second most popular car overall in 2002, 2003 and 2004. It was also Britain's best selling supermini in 2005, achieving third place overall, but in 2006 (the final year of production) it lost top place in the supermini sector after five years, and was overtaken by the Ford Fiesta. Overall, it was Britain's fourth most popular car in 2006.

Template:Infobox Automobile generation The Corsa D was created using a new version of the Gamma platform, which was co-developed by Fiat and Opel, and is also employed by the 2006 Fiat Grande Punto. The first official pictures of the Corsa D were released by Opel in May 2006. In the UK, What Car? awarded it 2007, "Car of the Year". The new Corsa is available in both three and five-door versions, and once again marketed as a Vauxhall in the UK. The same engines sizes from the Corsa C were available at launch, although the 1.3 L CDTI and 1.7 L CDTI engines were upgraded, with power ranging from Template:Convert to Template:Convert. The Template:Convert OPC/VXR version went on sale in early 2007, with a 1.6 L turbocharged petrol engine powering the front wheels. The Template:Convert 1.3 CDTI engine was updated in mid-2007 to bring CO2 levels to just 119 g/km, meaning that 12 months' road tax in the UK costs £35 and is eligible for the Plan 2000E (a rebate of €2000 in the purchase of a new car) in Spain.[3]

Flexfix is an optional integrated bicycle rack. It is essentially a concealed drawer that can be pulled out from the car's rear bumper. On it are two wheel-mount bike racks, rear licence plate incorporated in the system, brake/tail lights, indicators and fog and reverse light alternates in left hand drive and right hand drive cars.

At the 2007 Frankfurt Motor Show, Opel unveiled the Opel Corsa Hybrid Concept, a coupe that combines a belt-driven starter and alternator with a lithium-ion battery.[5] Template:Clear

Template:Ref improve section The Vauxhall Corsavan B is a small van based on the Vauxhall/Opel Corsa, made from 1994 to 2000. Engine options include:

All models feature a 5-speed gearbox, disk brakes on the front wheels and drum brakes at the rear. ABS was offered as an option. Corsavan variants of later-generation Corsas have also been sold under the Vauxhall[6] and Opel[7] badges.

Retrieved from "https://chevycamaro.fandom.com/wiki/Opel_Corsa?oldid=3979"
Community content is available under CC-BY-SA unless otherwise noted.