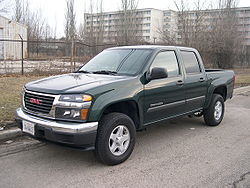 Template:Refimprove Template:Infobox Automobile The Chevrolet Colorado and its counterpart, the GMC Canyon, are General Motors' mid-size pickup trucks introduced in 2004 to replace the compact pickup Chevrolet S-10 and GMC Sonoma. Isuzu, which participated in the design of the truck, began selling its own version in late 2005, named the "i-Series". The Chevrolet Colorado was jointly designed by GM's North American operations, GM's Brazil operations, and Isuzu, based on the GMT355, itself the basis for the GMT 345-based Hummer H3. The vehicles are manufactured and produced at a GM plant in Rayong, Thailand, and in Shreveport, Louisiana.

The Colorado/Canyon offer both manual and automatic transmissions. GM also offers either a rear-wheel drive or four-wheel drive drivetrain with standard, extended, and four-door crew cab body styles. Most models come with the Template:Convert LK5 I4 engine as standard, but a more powerful Template:Convert L52 Straight-5 comes with the Z71 package on 4-door versions and is optional on all others. The 4-door Z71s also get the 4-speed automatic transmission standard. This package was later dropped in favor of LT2 and LT3. A ZQ8 edition is available with a lower and more road-tuned "sport" suspension than the standard Z85 and comes with 17 inch wheels, color-matched bumper and grille, and low profile fender flares. There is also a Xtreme edition of the ZQ8 which has a different front bumper, rear bumper, side skirts, fender flares, grille, headlights, and 18 inch wheels. The Xtreme edition is basically a continuation of a trim package from its predecessor, the Chevrolet S-10. For 2007, Colorado/Canyon was facelifted and offered new engines, which include the Template:Convert LLV I4 and Template:Convert LLR I5, new colors — Deep Ruby (Sonoma Red for the Canyon), Pace Blue (Sport Blue for the Canyon) and Imperial Blue (Midnight Blue for the Canyon), and new tires and wheels. Minor changes to the grille and interior for the LT and LTZ models; the LS models kept the same pre-facelift look, similar to the facelift of the TrailBlazer in 2005 & 2006. In addition, the "Colorado" & "Canyon" badges were phased out from the doors in favour of GM's corporate logo. For model year 2009, the Colorado was facelifted again and a Template:Convert LH8 V8 is offered, producing Template:Convert and Template:Auto lbft. For the 2010 model year, the GM badges were phased out from those trucks[1], although fewer 2010 models had the GM logo on the doors. Colorado/Canyon U.S. sales peaked in 2005 at 163,204 units, surpassing the perennial segment leader, the Ford Ranger, Nissan Frontier, by almost 35% and just 3.3% behind the new best-seller, the Toyota Tacoma. In 2006, however, while still leading the Ford pickup by 27.5%, Colorado/Canyon's sales lagged their Toyota competitor's by almost 34%. One 2005 Canyon owned by successful U.S. Senate candidate Scott Brown became famous as it was widely featured in his TV advertisements [2]. Despite crew cabs being limited to LT trims which most other Chevrolet vehicles only offer front bucket seating with the trim; the LT crew cabs are the only trims of the Colorado to have 6-passenger seating (i.e. with front bench seating).

In the Insurance Institute for Highway Safety's frontal offset test the Colorado (extended version) is given a "Good" overall score,[5] however the crew cab is rated "Acceptable".[6] In the side impact test of the Colorado crew cab is rated "Poor" with or without side curtain airbags.[7][8] Side curtain airbags were made standard on all 2010 models; side torso airbags are not offered.

Retrieved from "https://chevycamaro.fandom.com/wiki/GMC_Canyon?oldid=4154"
Community content is available under CC-BY-SA unless otherwise noted.