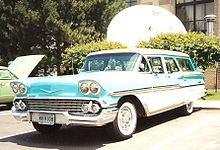 Template:Unreferenced stub Brookwood was a name used by Chevrolet on certain models in its station wagon offerings between 1958 and 1972.

Introduced in 1958 as Chevrolet's mid-priced station wagon, Brookwoods were trimmed in line with Chevrolet's mid-priced Chevrolet Biscayne models. The Brookwood offered for the 1958 model year was a 4-door station wagon, available in either six- or nine-passenger models. In 1959 Chevrolet eliminated its entry-level Delray series and the Biscayne became Chevrolet's least expensive series. Tied to the Biscayne, the Brookwood became the entry-level (and least expensive) wagon offered by Chevrolet. Brookwoods were now available in two- or four-door body styles, both in six-passenger configuration only. The two-door variant would become the basis for the new-for-1959 El Camino. Unlike the Brookwood, the El Camino could be ordered in trim levels corresponding to the entire full-sized car line including the Impala. Chevrolet stood pat on its series offerings in 1960. In 1961, the two-door body style was dropped, but the nine-passenger model returned. Chevrolet discontinued the Brookwood name for 1962, instead naming their station wagons after their series names: Biscayne, Bel Air and Impala.

In 1969, each Chevrolet station wagon regained its own unique model name. Brookwood, again related to the Biscayne, was assigned to the least expensive model, followed by the Townsman, Kingswood and Kingswood Estate models. Brookwood models could be ordered with either six-cylinder or V8 engines. 1970 model Chevrolet full-size station wagons were nearly identical to the 1969 models, the biggest changes being the elimination of six-cylinder availability and the redesign of the front fascia, which did away with the previous year's loop bumper-grille assembly in favor of a more traditional front bumper and grille design. In 1971 Chevrolet restyled its full-size models; all full-size station wagons, including the Brookwood, received GM's clamshell rear gate assembly with power rear window. Unlike the door-gate assembly offered in 1969 and 1970, the clamshell gate design required raising the rear window up into the roof of the wagon, while the gate slid downward and under the cargo floor. GM offered an optional electric motor assist for the gate on its lower-priced models after consumer complaints about the weight of the gate and difficulty many had in manually lifting the gate into locking position. Midway through the 1971 model year, all full-sized station wagons, including Brookwoods, received the previously optional TurboHydraMatic transmission as standard equipment. Despite the series economy roots, virtually all previous Brookwoods had been built and sold with the automatic transmission. Brookwoods received Chevrolet's front fascia restyle in 1972 and could be ordered with any number of options from full wheel covers to a vinyl top. For 1972, Chevrolet listed a four-door sedan and the Brookwood in that year's Biscayne line. For 1973, Chevrolet eliminated the Biscayne and ended production of vehicles bearing the Biscayne and Brookwood names. The Biscayne sedan & wagon was sold in Canada until the 1975 model year. From 1969 until 1972 the car was built at the Oshawa Car Assembly in Ontario. Template:Chevrolet Vehicles Template:Chevrolet cars timeline 1950-1979de:Chevrolet Brookwood lt:Chevrolet Brookwood ro:Chevrolet Brookwood

Retrieved from "https://chevycamaro.fandom.com/wiki/Chevrolet_Brookwood?oldid=3953"
Community content is available under CC-BY-SA unless otherwise noted.